Few things are more motivating than the prospect of getting rich quickly. When word of the discovery of gold in California first spread, it was the true opportunists who responded first. To use our modern parlance, these were the original “first movers,” true risk-takers who literally moved west as fast as they could to be the first ones on the gold. Most struck it rich by striking first, and it is this opportunistic interpretation of the Gold Rush that has it continuing to be an apt metaphor for entrepreneurialism.

If you’re a marketer, you should be raring to join what I call “The Old Rush” — a modern-day chance to strike it rich by prioritizing the highly valuable, aging consumer. To do so, you must be every bit as opportunistic as the miners were, and you must move quickly to secure the riches first. While there is no learning precedent for marketing to the Baby Boomers in their 50s and beyond, we do have the Gold Rush, and the analogies are remarkably relevant.

The Gold Rush began in 1848 when James W. Marshall found gold at Sutter’s Mill in Coloma, California. Word of the discovery spread quickly, and by the end of the following year some 300,000-plus prospectors (a.k.a. 49ers) from every region of the world had made the trip to California. While it clearly required resourcefulness, perseverance and optimism to succeed once you got to the Gold Rush, imagine what it took to have made the decision to go there in the first place?

Unlike buying a Powerball ticket, choosing to go to the Gold Rush posed a significant financial risk and real physical danger for a reward that was both mysterious and elusive. Yet hundreds of thousands of people — who were already leading good lives — looked the other way at this excessive risk because the prospect of reward was exceptional; mining for gold — like marketing to age — was virgin territory.

That which fueled these opportunists should fuel you. As has always been true of trendsetters, those who identify and act on the opportunity first will be judged and questioned by conventional minds. However, all conservatism is abandoned once the precedent of success is established. It’s only a matter of time before someone in your market space capitalizes on the lucrative aging opportunity. By the time the trend followers catch up with this trendsetter, the easy pickings will be gone. By analogy, those who got to the gold first found nuggets on the ground. Those who waited and watched had to pan and dig for dust.

Our history reminds us that the 49ers were true leaders and risk takers. Here’s what you can do to pioneer marketing to age for your category:

Leave familiarity behind. As the Gold Rush unfolded, the dreamers stayed home and the leaders moved west where they were rewarded for their pioneering spirit. They knew that moving ahead fundamentally required leaving something behind. For the get-rich-quick opportunity that we’re calling marketing to age, familiarity is the practice of doing things the way they’ve always been done, a.k.a. “best practices.” None of the 49ers had mined for gold before, just as most brands have never marketed to age. To succeed in doing what others have yet to do, you will need to think like a miner and believe that you’re industrious enough to figure it out along the way. Your organization will embrace you for taking the risk to mine new business in new places.

Gear up! Have what you need to succeed. To do well in the Old Rush, you will need to act quickly and plan carefully. Start by determining how much rush is necessary to capitalize on the Old Rush, as every market space is different. Act too quickly and you may risk not executing effectively; act too slowly and the best plan in the world may not make up for the missed opportunity. Most of the 49ers didn’t overthink this. There was simply too much at stake, so they started heading west and fine-tuned their plan along the way. We rarely do this in business, but here’s a case where you should.

Once you have an initial plan, provisioning comes next — i.e., what types of people, partners and resources will you need to execute your plan for getting to the Old Rush? Keep it simple and don’t “over-pack.” You can’t afford to have a cumbersome process or a big team that will slow you down as you are trying to speed your way to unexplored territory. Lastly, prepare to be unprepared. You’re going to be marketing to age for the first time, learning as you go and quickly adapting.

Know where the gold is. Lacking geological maps and technology, most of the miners dug for gold where gold had already been found. If one of your competitors is already mining the aging space successfully, then you might want to consider some type of adjacency play. If not, then you’re going to need to prospect. Prospecting is about exploring and discovering. Which Boomers are the most valuable? How should you reach them? What does your brand need to be for them? Since you are first, you have the advantage of positioning your offering in a preemptive way. Think like a miner who has just found gold. Stake your claim to fence-out future prospectors!

In the end, thriving in the Old Rush is all about striving to do what hasn’t been done before. It’s also inherently about speed. At a time when businesses are being disrupted or transformed overnight, it has never been more important to have your own differentiated, fast growth strategy. As for marketing, there simply isn’t another fast growth opportunity as enticing as unexploited aging space, and the way forward is relatively simple. 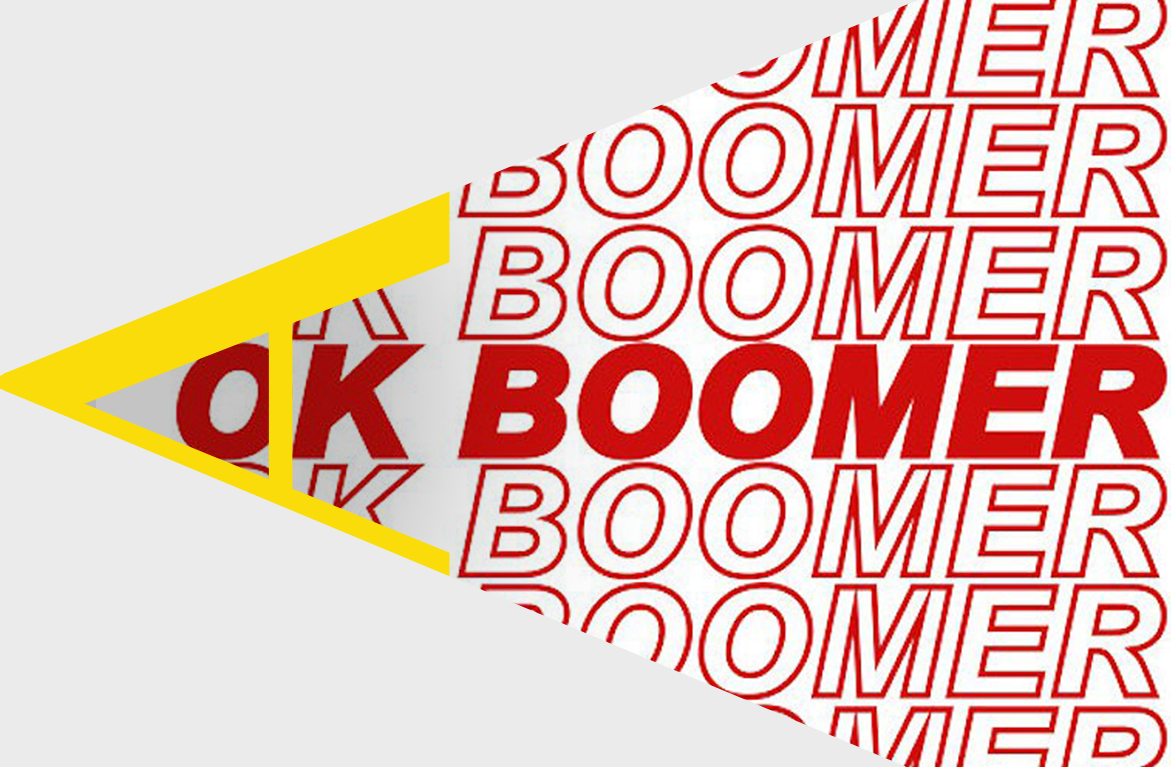 Generational differences have existed for years, not just between Boomers & GenZ. We'll explain why #OKBoomer isn't any different from Baby Boomer Counter Culture in the 60s and what marketers can take away.

So who’s it going to be this week? Last week it was Roseanne Barr and her self-destructive racist tweet, yet another head-spinning example of utterly thoughtless behavior in an era that the WSJ has come to call “The Age of Apologies.”